The weather has been horrible for months, its been mild but terribly cloudy.  For example, the only two clear nights in London lately have been Christmas Eve and New Year’s Eve, both of which I had plans for. It has really been very difficult to get good views of the sky from London for that whole time..  We haven’t had chance to do as much as we would have liked in continuing to learn how to use the telescope.

Messier 81, about 5 times as far away as Andromeda.

Sunayana and I did get this image of M81 earlier this month, which is a large Galaxy not very far away but it should be a lot brighter.  I hope you can see there is a galaxy there though!  We’ve also been trying to learn how to use Colour as you can see with this image of the Ring Nebula M57 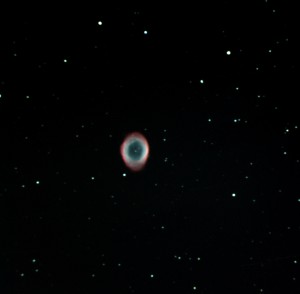 which is not bad for the time being at least.  There are very many tricks that we are learning about stacking images, but we haven’t started to do things like subtracting flat fields and dead pixels.  Hopefully we will get better weather in 2016.  Certainly we are looking forward to the return to the skies of Jupiter which already feels like an old friend.  February will be good for that.  However we want more galaxies and more student access to the telescope, which we are working on and will report more about soon…

best wishes for the new year to you all.